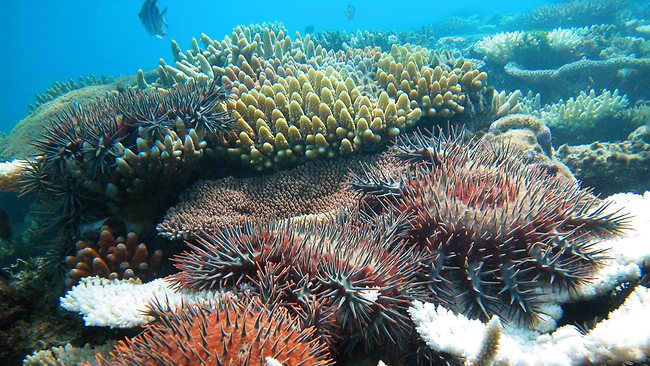 What are you researching?

I am currently mid-way through my PhD in Molecular Biology studies at the University of the Sunshine Coast in collaboration with the Australian Institute of Marine Science, with a project focusing on the neural biology of the Crown of Thorns Starfish (COTS), Acanthaster planci.

The aim of my PhD is to elucidate the neural peptides involved in the biology and physiology of these coral eating critters on the Great Barrier Reef!

With the Crown of Thorns Starfish outbreaks a continuous threat to the reef, my project explores the molecular basis of reproduction and chemical signaling molecules used by the COTS during events such as aggregation and spawning in aide of developing novel biocontrol methods. Although there are emerging technologies and methods to control COTS numbers on the reef, there still remain gaps in the knowledge surrounding the COTS biology.

What do we know about Crown of Thorns Starfish?

What do you hope to achieve?

My aim is to gain a greater understanding of the neuropeptides and neurotransmitters used by COTS for this maturation, aggregation, spawning and reproductive physiology. Initial results are revealing some very exciting and unique biological attributes to the COTS and will hopefully aid in future control of the COTS crisis!

Thanks for sharing your incredible insights with us, Meaghan. Keep up the great work!

Check out our range of Programs for schools and early learners to learn more about the marine environment!