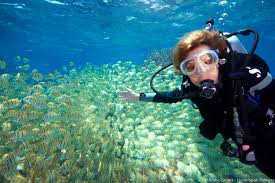 We at Ocean Life Education are proud and privileged to be protectors of the sea. We have made it our mission to raise awareness about the plight of our planet and in particular, the more than 70 percent of it covered in water.

For us, it’s a matter of following in the footsteps of the many wonderful conservationists who pioneered a global effort to highlight environmental issues impacting beyond our shorelines.

French explorer and film-maker Jacques Cousteau was amongst the first to put the spotlight on life below the surface in his book “Silent World” which was published almost 70 years ago. His invention of reliable diving equipment allowed millions of people to discover and understand the underwater world and along the way, draw attention to the fact that rubbish in our oceans does not just magically disappear when it sinks out of sight. Debris still litters the seabed from ships that sunk hundreds of years ago, and the problem of plastic pollution is growing bigger by the day.

British broadcaster Sir David Attenborough has spent most of his adult life sharing footage of vulnerable animals, many of which live in our oceans. The 93-year-old is a champion of the natural world, helping his audience to understand how everything we do on land has a flow on effect out at sea – trying to ensure even if it’s out of sight, it won’t be out of mind.

Across the Atlantic, renowned biologist, Dr Sylvia Earle, has made it her life work to learn about the sea and educate others about its struggles to stay healthy. Back in the 1950’s, when the scientific arena was dominated by men, she forged a career in marine biology and convinced people to pay attention to the colourful world beneath the waves. Her impressive credentials and passion for the ocean led to her being named as Time Magazine’s inaugural Hero for the Planet, 21 years ago.

Closer to home, talented photographer Valerie Taylor, has helped to turn the tide on treating the sea as merely a place to plunder for our own needs. She and her husband were heavily into spearfishing but chose to capture images instead when they saw how much they had depleted a local reef. They became fierce defenders of sharks, debunking many of the myths surrounding the most feared of the ocean creatures.

But along with the most recognisable faces in the crusade to sustain our greatest natural resource, is a legion of everyday people trying to make a difference. Every individual who removes rubbish from the beach, stands guard over turtle nests, reduces their plastic waste or speaks out against high density coastal development is helping to protect that part of our planet that creates most of the oxygen we breathe.

And we at Ocean Life Education will continue to do our bit, inspiring young minds to appreciate marine creatures though our interactive programs. Along with all the information we share to keep students well informed, we give even the youngest of participants the opportunity to create a bond with our animal ambassadors that may just lead to a life dedicated to saving our seas.