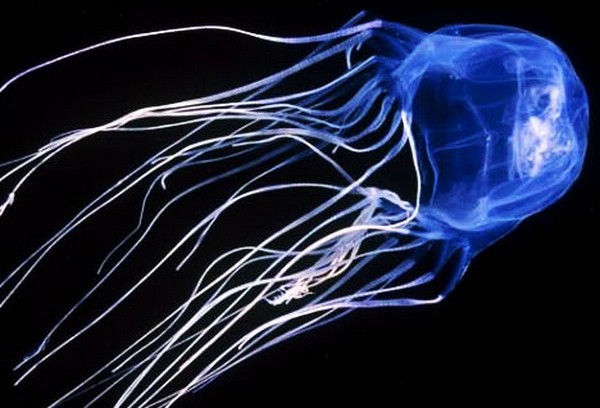 All jellyfish sting and that’s the unfortunate truth.

Every jellyfish fires out millions of little stinging cells called nematocysts, similar to a bee sting only much smaller and many more of them. The only difference is in the potency and the length of the sting barb and the reason for this variation is due to how they catch and eat their prey. Some jellies like to catch and eat small fish that are fast and agile. A jelly needs to subdue its prey fast so it doesn’t get damaged in the ordeal or escape. So some have very powerful neurotoxin venom and this is what can be dangerous to humans.

The Bluebottle (or Man-o-war or Sea Wasp) is another common Jelly responsible for the greatest number of injuries to swimmers due to their numbers and being found further south than the Box Jellyfish.

In the last few years however, we have heard more about a much smaller but quite insidious fellow – the Irukandji. This guy is indeed a small species of Box Jellyfish, of which there are 16 different species. The two most common and responsible for most deadly stinging occurrences are the Carukia barnesi and Malo kingi.

These Irukandji grow anywhere from 5-25mm, each one with 4 long tentacles up to 1m in length. Their sting initially is moderately irritating with symptoms of their venom delayed anywhere between 5 to 120 minutes after. On average it takes 30 minutes for symptoms to appear and include severe lower back pain, nausea and vomiting, difficulty breathing, profuse sweating, severe cramps and spasms, and a feeling of impending doom. Some species also cause severe hypertension (high blood pressure). Irukandji syndrome can be fatal, but generally is not. Hospitals throughout tropical and subtropical Australia have good evidence-based protocols for managing Irukandji syndrome, and most people stung make a full recovery.

Alarming research into the Irukandji

Scientists from James Cook University Townsville Queensland have made some alarming recent discoveries about the Irukandji.

Unlike all other jellyfish known to science, Irukandji have stinging cell on their medusa (dome/bell), believed to be an adaptation to sting prey from anywhere on their body due to their small size to increase their chance of catching prey. The other worrying feature is that the most well-known immediate remedy for jellyfish stings, vinegar, actually promotes the discharge of venom into Irukandji victims up to 50% more. Scientists believe this increase to be of lethal consequence and now advise avoiding use of vinegar on victims if unsure what type of jellyfish was responsible. Blue Bottles and Box Jellyfish have fairly easy to detect stinging marks, thus vinegar in those cases is still suggested.

What does this mean for us?

It is now well documented the occurrence of these jellyfish in waters as far south as Hervey Bay and Fraser Island. It is evident that with increasing water temperatures (1 to 2 degrees over the past few years) has led to a migration of Jellyfish including Irukandji into more southern waters. How far south will they go, no one can say for certain, but awareness and vigilance is required when visiting beaches and reefs all over Queensland. Being prepared and knowing what to do is important for our safety and wellbeing.

And a final note, this is not a case for hysteria. There have been some false identifications of Irukandji and bigger box jellyfish in recent months. The morbakka or Moreton Bay Jellyfish is related but nowhere near as dangerous.

If you’re interested in learning more about the Weird & Wonderful creatures of the Sea, check out our school holiday program or invite us to your school to deliver a curriculum-based program.