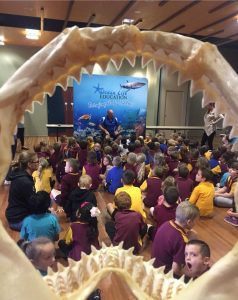 Ocean Life Education had the rare opportunity to take the Ocean to the Outback this week, as part of a funding program supported by the State Government initiative, Advancing Queensland.

Children in Jandowae, Chinchilla and Dalby were excited to meet our amazing sea creatures which many had never seen before.

As usual, the sea stars proved a big hit, as too did the colourful tropical sea cucumbers with their vibrant coats and super soft bellies.

Bob the banded bamboo shark made an appearance at every show, but he’s not really the touchy feely sort so he prefers the sanctuary of his clear tub.

The logistics were huge to move the animals far from their natural environment.  A truck was hired, 1000 litres of sea water was stored and carried along with pumps and filtration systems.

But all the hard work and effort involved was well and truly worth it according to Ocean Life’s Director of Education, Richard Coward.

“It’s always rewarding to see the children’s faces light up when they get close to our animals – but particularly on this trip where most of the kids had never encountered these animals before.  They were keen to learn all about them and ways they can help preserve the sea creatures’ environment – even when they live a long way from the coast.”

“We explained to the children that every bit of rubbish that ended up in inland waterways will eventually find its way to the ocean where it can be mistaken for food and make the animals very sick.”

And how did the animals react to such a long road journey?

“Our animals are great travellers and are transported in greater comfort than most humans,” said Richard.  “Our other educator Meaghan and myself may take a bit longer to recover from all the excitement!”

But the inland adventures are not over yet – Richard will be heading to Gayndah next month to help a whole new audience fall in love with his colourful array of creatures and become champions of the sea – even if it is from afar!